Throughout Thaidene Nëné, there are many places that have special cultural significance for our people.

Ts’ąkuı Theda (Lady of the Falls) 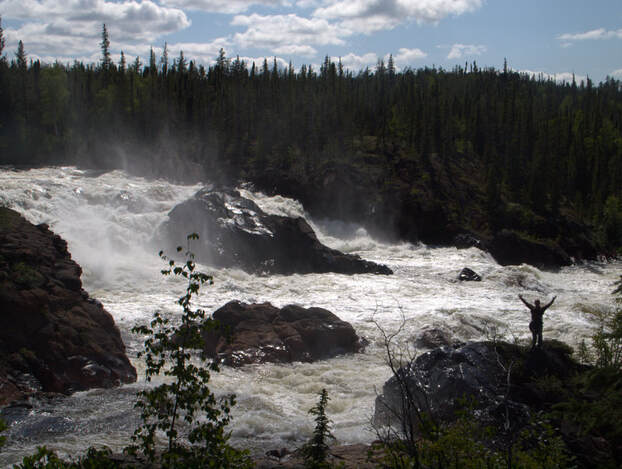 Ts’ąkuı Theda (Lady of the Falls) is a spiritual site in Thaidene Nëné, where our people go for healing and to pray.
The relationship between the people of Łutsël K’é and Thaidene Nëné has existed since time immemorial. The story of Ts’ąkuı Theda comes from the time of early creation, the time of the giant animals. This story takes place during a hard time, a time of hunger. It begins at Ɂedacho Kúe (Artillery Lake). Ɂedacho Kúe is named after one of our early leaders, Dacho, whose descendants still live in Łutsël K’é.

Dacho led his people, chasing two giant beavers from Ɂedacho Kúe west towards Tu Nedhé (Great Slave Lake). About halfway down Ɂedacho Kúe Dezé (Lockhart River), the group harvested one of the giant beavers. The beaver was shared amongst all the people, except for one. There was an elderly woman whose husband had passed on and who had no children who wanted some beaver blood, but she was refused because there wasn’t enough to go around.

The next day, Dacho and the rest of the people continued on towards Tu Nedhé, following the second beaver. When they arrived to the mouth of the river—Desnéthcheé in Dënesųłıné—they realized the elderly lady wasn’t with them anymore, so Dacho sent two young healthy runners back to look for her.

They found the old woman at the last camp. She told the young people that, in her despair, she had been communicating with the creator. She had been praying and soul searching. Eventually, the creator came to her and asked her to volunteer for eternity to sit in that spot and to provide those who visited her with any help they need—physical, emotional, spiritual. Not only can people go to her and ask for her help, but through her they can also speak to the creator.

By the time the young men found the woman, the rocks were already forming around her legs and arms. She said to them, as long as I am respected, I will be sitting here until the end of time.

Ts’ąkuı Theda is the heart of Thaidene Nëné, everything flows out from her. The Thaidene Nëné Indigenous Protected Area protects her ecosystem and her watershed.

Indigenous people across the country and around the world have responsibilities to their territories that are enshrined in their legal traditions. Places like Ts’ąkuı Theda remind us of our continued responsibility to ensure that all our relations have a place that they can call home in a healthy environment. The people of Łutsël K’é will continue to draw inspiration from Ts’ąkuı Theda to manage our relationship with Thaidene Nëné.
Story shared by Steven Nitah 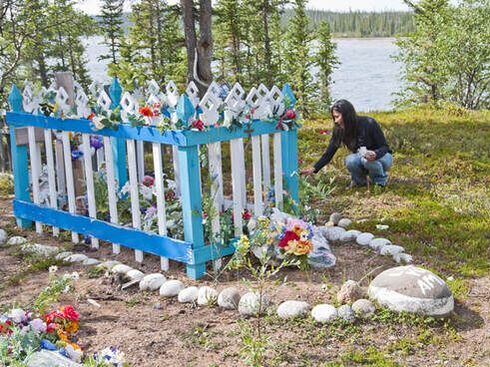 Every summer, Łutsël K’é Dene gather at a special place called Kache, near an ancient village site at the mouth of the Lockhart River, to share, celebrate, and rejuvenate.
​
Today, the Ni Hat’Ni Dene are stationed here and elsewhere throughout Thaidene Nëné to protect and share the rich stories of this area with visitors.

The Snowdrift River is located to the southeast of Łutsël K’é. It feeds into Tthe Kálı̨ka Tué (Stark Lake), and then into Tu Nedhé (Great Slave Lake). It continues to be an important place for food gathering, community celebrations, and private cabins.

Along the riverbanks, there are constant reminders of the nomadic history of our ancestors. Homesteads can still be seen, along the river and beside Austin Lake, where many of our grandparents and parents were born. Ancient pathways follow the course of the river to rich hunting grounds upriver.

The lower Snowdrift is particularly magnificent. Our stories tell us about an old Dene woman referring to the last 30 kilometres of the river as where the water "falls down the mountain." Here, the river tumbles over falls and through canyons over the MacDonald Fault, an ancient rift along the southern boundary of Thaidene Nëné .

During the summer of 2012, the lower Snowdrift was descended by kayak for the first time by John Blyth and Ben Linaker, showing that this could be a feasible whitewater kayak trip.
​
The river valley is an important area for trapping fur-bearing animals such as marten, lynx, wolverine, and otters, and a rich area for hunting muskoxen, caribou, bear, and moose. Changes in climate and human activity have caused animal populations to fluctuate each year around the river: muskoxen now seen along the MacDonald Fault were not historically present, and are believed to have migrated southwest from the barrenlands in search of more food.

There are many important fishing areas along the Snowdrift, especially where it flows into Tthe Kálı̨ka Tué, and at the first set of falls. Families set nets, changing the position of nets to catch different species depending on the season. Lake trout, whitefish, and ciscoes can be found in the Snowdrift.